The Skoda Enyaq EV range has been well received by EV buyers in the global market and the Czech brand is now bolstering its EV portfolio with the new Vision concept. The new Skoda Vision 7S concept today unveiled the company’s future EV strategy. The Skoda Vision 7S concept is a zero-emission seven-seat electric vehicle concept and is part of Skoda’s plan to launch three electric vehicles by 2026. In terms of dimensions, it is larger than the Enyaq and is featured in a ‘6+1 seating arrangement, with three rows and an infant seat mounted above an adjustable center rack between the bottom two rows.

The Skoda Vision 7S also kicks off Skoda’s new design philosophy where the design team, led by Oliver Stefani, introduced a solid piano black plastic which replaces the conventional grille. Skoda calls it the “Tech Deck” because it’s used to house and hide the myriad of sensors needed for driver assistance systems. The black element is flanked by slim LED running lights and surrounded by another strip that sports the main headlights of the Vision 7S. The bonnet has an inverted power dome which is basically a design change as there is no engine under the bonnet and it also features Skoda’s new logo where the name is spelled out in letters just like we saw Skoda putting its cars’ name to Skoda’s design team is also trying to incorporate power outlets to power external devices into the pillars. 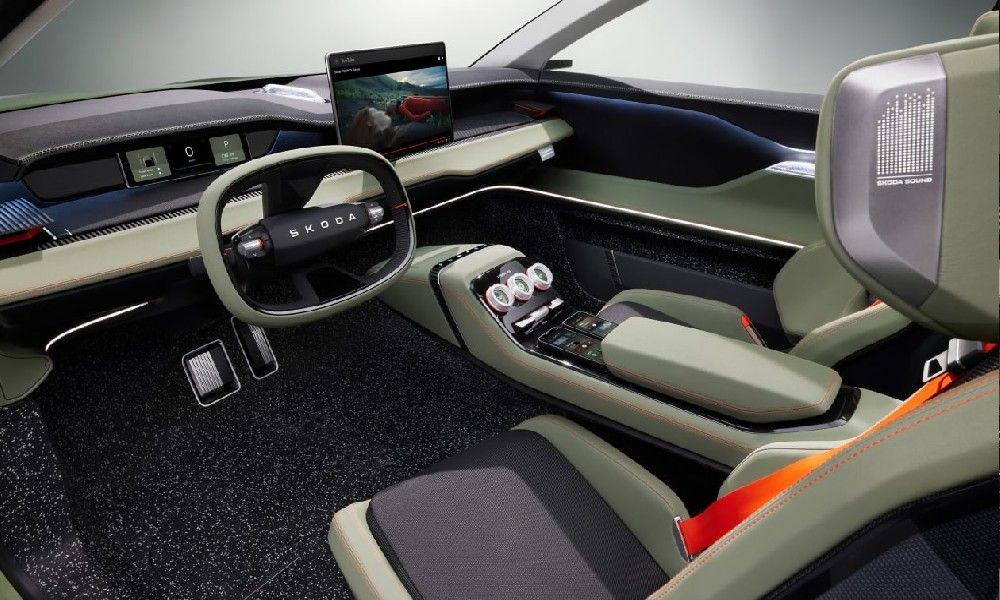 Inside, a massive 14.6-inch touchscreen takes center stage. The front row seats can swivel slightly inward, making it easier for passengers to watch content. The steering wheel has a new two-spoke design that looks likely to make it to production, and behind it is an 8.8-inch digital instrument cluster. The entire cabin has been finished using recycled and sustainable materials, with seat fabric made from 100% recycled polyester. The cabin also features matte paint in all areas where there would currently be glossy plastic. In terms of functionality, it incorporates backpacks in the seatbacks and extensive use of magnets to help hold items such as smartphones and metal water bottles, among others. The current seating arrangement is unlikely to be retained for production, and we expect a center seat in the second row with child seat mounts.

When the production car launches, there will be several powertrain options, but the concept car was introduced with an 89 kWh battery offering a range of over 595 km/h. The Skoda Vision 7S concept is based on the same MEB architecture as other Volkswagen Group electric vehicles like the Enyaq. And of course, it will have a longer wheelbase than the Enyaq since it is a seven-seater.