Upon Your Grave has been dormant for a while, but now the death metal band from Quebec, Canada is rising with a new EP on the horizon and a music video for single “Pandora.” The single tells a classic story, about the dynamic and sometimes melodic death metal that the band has been honing since 2009. Vocalist Jordan Jolicoeur explains in more detail:

“The single speaks of the legendary story and the box that bears the same name. It’s the only song on the EP that tackles a somewhat spiritual theme in touch with ancient Greek myths, while maintaining the same vibe as the other songs. It’s in your face, relentless, aggressive, and one we really like to play live because of its short, action-packed nature. The arrangements are smart and cohesive, offering a fast and brutal fix for any listener.

The band continues to say that fans who are familiar with their previous material will likely see them from a new perspective, that they will find a much more aggressive and authentic sound, more experienced and with a change in sound. In terms of the lyrics on the release, Jolicoeur details that he went for something brutal and grand to fit the tones of the instrumental compositions. The aggressive and lively lyrics are inspired by the epic soundscapes that drive the feeling of each track.

Mixed and mastered by Chris Donaldson (Cryptopsy), Gold & Decay is 18 minutes in total, short and sweet, straight to the point, diverse death metal. They originally intended to release a feature film, but decided to cut it down to an EP, to gauge the reaction to their new sound. They have a lot of material out there, and LP is probably in their future.

Upon Your Grave is ready to show fans what they’ve achieved through this new record and on stage. Those who see them will be greeted with boundless energy, a tight performance and incredible double pedal drums that will hit you hard. They are recommended for fans of Lamb Of God, The Black Dahlia Murder and The Absence. 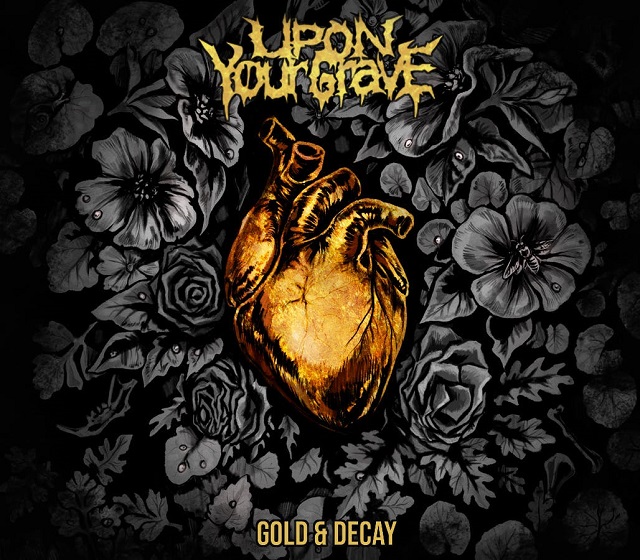 “Revived”
“From Beyond”
“Pandora”
“Supremacy”
“Transcend”